Millions of people live in Nairobi’s shantytowns suffering from high rates of crime, poverty and widespread corruption, but even in these debilitating conditions, art thrives, particularly music.  Musicians possess the power to act as voice boxes for the disenfranchised in a peaceful and productive way, but because music is often a cottage industry in Kenya, musicians are vulnerable to abuse, undue influence, and financial manipulation.

PeaceTones® Kenya: Songs for Justice project addressed many of the challenges at the heart of these conflicts: 1) the inability of individuals to express themselves and be heard, the failure of which often leads to violence and vigilante justice; 2) a lack of government transparency and accountability to the public; 3) the prevalence of politician-sponsored propagandistic and often inciting musical content; 4) the lack of independent counter-voices for peace and dialogue; and 5) knowledge and market access barriers for those with positive, constructive social justice oriented messages.

The PeaceTones® team spent a month in Nairobi, from February 24-March 21, completing phase one of our project. With the help of our amazing
local, community partners, we  successfully hosted two musicians’ rights workshops for more than 200 musicians from three Nairobi slums. We also auditioned 180 of those workshop attendees to participate in phase two- an online contest for original artists, the winner of which will record their first album with PeaceTones®.  Thirdly, we held two peace concerts – one in Kibera and one in Babandogo – to promote positive and unifying messages within our target communities and also to publicize the PeaceTones® workshops and contests. 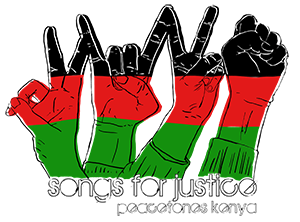 A panel of independent Kenyan and American judges went on to select the 22 most promising of the 180 auditioners to take part in an online contest, where the winner receives the opportunity to record music and tour with PeaceTones®. Each participating musician recorded a music video with PeaceTones®’ help in-country to use in this competition.  The winner of the contest was determined by public vote on PeaceTones®’ online voting platform, so that audiences are built not only for the winning artist, but for all participating artists.

This contest served as a means for all participating  artists to practically apply the marketing and technology tools learned in the workshops. The contest will be open to musicians with original music and positive social messages. The contest not only gave publicity to many unknown artists and their amazing works of music, but also helped publicize their messages of struggle, resilience and hope. And with over 10,000 votes cast from around the world, the winner is… 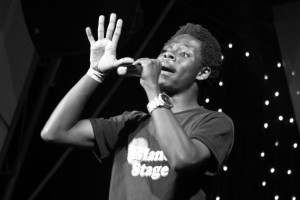 The contest winner will become a PeaceTones® Ambassador, record singles and music videos with PeaceTones®, and receive 90% of profits from music sales, of which a portion will go to a local community development project of their choosing that is vetted and meets certain criteria. PeaceTones® will work with the winning artist to market the album and its message both within Kenya and internationally. The end products will be an arts community with a greater sense of legal and social justice empowerment, an understanding of their responsibilities and power as musicians, and greater knowledge of practical skills in marketing and using technology.

For more information about the online competition, click here.

Christy Leos | Blog | No Comments
PeaceTones is an organization where music creates an opportunity for the reduction of political, social and ethical conflicts. We…

Christy Leos | Blog | No Comments
532,387 lives stand ready to be transformed. The "Let Peace Begin" tour, our next project, will share the experiences of…